“The Imitation Game” has been on my list of movies to see ever since I saw the first trailer. Period drama, based on a true story, English accents – it had all the makings of a movie I would love. What I didn’t account for is the amount of wool and tweed that would fill the screen. And when you find yourself keeping your eyes peeled from one scene to another, looking for the next great sweater vest or Fair Isle cardigan to feast your eyes on, that’s when you know you’re a knitter.

Yes, the movie was great. Yes, thinking of how this happened in real life is amazing. But seriously. Let’s talk about the wool.

This was the first sweater vest that caught my attention. Look at the layering! Look at the muted blue color! Look how it brings out Benedict Cumberbatch’s blue eyes!

The ribbing is striking. I’ve never been a big fan of ribbing, because it’s always been too repetitive and not detailed enough for my taste. But that’s exactly what makes it work here. A simple 2×1 rib gives the outfit bold texture, and the repetition hints at the whole concept of pattern in Alan Turing’s computer work.  (Don’t think I came up with that on my own, though. Costume designer Sammy Sheldon Differ said it herself.)

So what other woolen goodies were in the film? Feast your eyes on this… 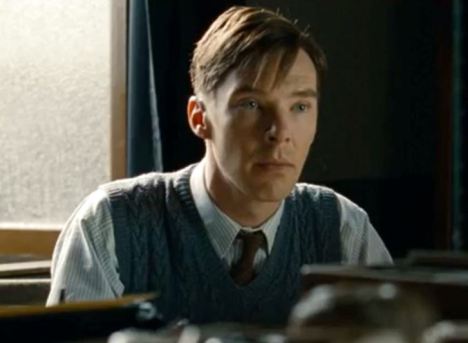 Fair Isle hiding out in the background, but stealing the scene nonetheless.

I imagine all of these sweater vests were made in 100% British wool, which leads me to think they’re probably a little itchy. Too bad, boys. Deal with it, because you look great in them.

But the award for best woolen ware goes to Keira Knightley. Leave it to the strong female character to wear a strong wardrobe. She made me long for a classic cardigan comeback with this blue number. 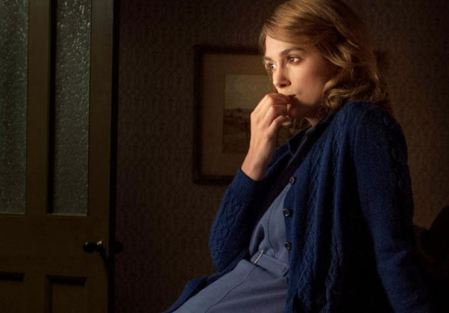 And sealed the deal when she debuted this green Fair Isle beauty. These are never colors that I would choose for a Fair Isle sweater, but my eyes were drawn to the stunning green. It popped in every scene, especially since most of the other characters wore more muted color tones. It’s a bold statement but manages to keep its classic look. And the simple detail of leaving out one repeat of the green pattern creates the illusion of an amazing waistline. It’s the little details that can make such an impact.

Look how she stands out among all those brown and grey suits!

Cheers to Sammy Sheldon Differ and her crew. (Can I be your assistant in your next sweater-filled film?)

UPDATE: Thanks to Ann at Mason-Dixon Knitting for sharing this post with Kay and their dedicated readers! Ann made a cowl with the beautiful pattern on Keira Knightley’s sweater. Now if you’ll excuse me, I’m going to watch “The Imitation Game” on Netflix…

9 thoughts on “Decoding the Knits of ‘The Imitation Game’”